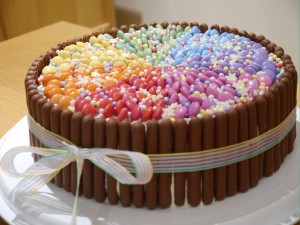 The first time I heard of a resignation cake was earlier this year when my husband showed me a post on redit. Someone handed their notice in written in icing on a cake. I think this is a great way to break the news as how cross can someone really be with you if you’re giving them cake?

Next year marks a big change for us as my husband has just accepted a job which will see him working from home most of the time with some travel to other offices. Once he had accepted the job however he then had to break the news to his current boss; so naturally I offered to make him a cake, as one of his colleagues said it helped to “soften the blow”.

I spent a bit of time while we were waiting for the official job offer looking at ideas for cakes but in the end the offer arrived late one evening and he needed to had his resignation in the next day so I resorted to a simple but effective colour wheel cake inspired by one of the entries to November’s Celebration Cakes and Bakes. A large chocolate cake using 1.5 x my standard chocolate cake recipe with vanilla frosting, smarties and chocolate fingers. I separated out the smarties into colours and once the cake was covered in frosting I arranged them edge down in the frosting. (I kept the brown ones back and snacked on them the next day :). To fill the gaps between the smarties I added rainbow sugar pearls and white chocolate stars. 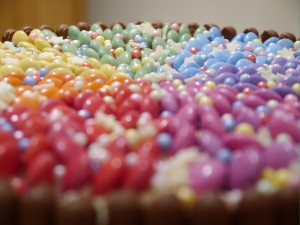 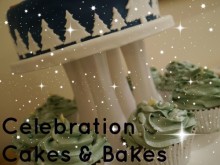