Who would have thought you could have a fabulous day in the sunshine without leaving home? I’m by no means a gardener, as my Gardening post proves, but yesterday was such a lovely day and we had no plans, so after breakfast we went out into the front garden. I’ve never cut the grass with both kids around before but I thought they could spend a bit of time in the sun while I was had a go. It’s only been a couple of weeks since I last mowed the lawn but it was already looking more like a meadow than a garden. There was a lovely moment when my son picked a flower (one of many many dandylions)  for his sister. Such a sweet image and one to look back on I think.

I got the mower out and they were both very excited, running up to it as I mowed and giggling, of course just before I finished my daughter nearly fell standing on the wire, meaning the last section was cut in stages with me stopping to comfort hysterical small child every 2 minutes. 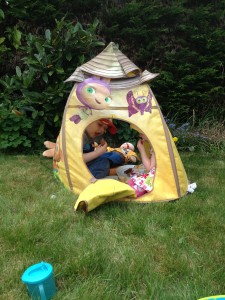 Grass done and the kiddywinks were playing nicely so I brought some toys out and moved on to reclaiming the rockery and path from the weeds. Suddenly time had disappeared and it was lunchtime. My son asked if we could have a picnic so I set the food out on our blanket.  Minutes later they had de-camped to their play tent instead. 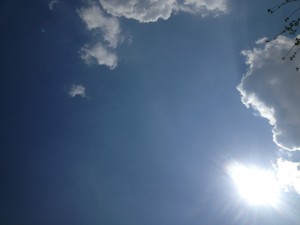 While they enjoyed playing house I had a little lie down in the sun. It was wonderfully sunny and warm and the sky was a beautiful blue. It didnt last long as my son decided my head should be in the tent and daughter decided to feed me her lunch.

We spent the whole day outside. While I cut back some of the many bushes and shrubs the kids went on a monster hunt through the bushes and had races on their rideons. If someone could explain to me why the largest child always ends up on the smallest bike I’d be very grateful. After tea they wanted to go outside again for more monster hunting and to jump in the hole that has been in our lawn since we moved in. I didn’t have the heart to make them come inside so they had a rare treat of staying up until hubby got home. It was worth it to hear the excited “Daddy! Daddy! Daddy!” as he arrived.Today we are back to grey skies but hopefully we will have some more sunny days soon. 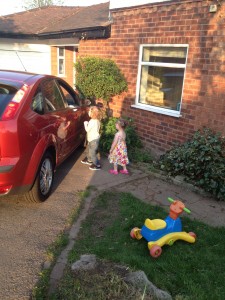 This post counts as my entry to the Tots100/Curious George competition.