If you go down to the woods today you’re sure of a big surprise. Ok well maybe not woods as such but if you had a peak into my garden you might find some teddy bears having a picnic in our new tree house. 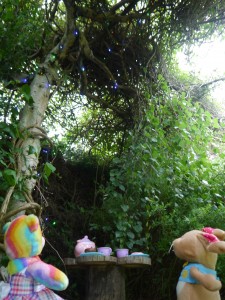 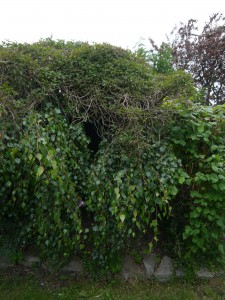 Recently I’ve been reclaiming the wilderness that is our garden and trying to get it back into some sort of order. Part of the reason I’ve been able to do this is that my kiddywinks are now big enough to play nicely in the garden without constant help. While I’ve been fighting with bushes and cursing the ridiculous amount of dandelions they’ve been keeping busy going on adventures. One of their favourite things to do is to go looking for monsters in the bushes next to our hedge – it creates a brilliant tunnel for little people to explore. The entrance to the tunnel is underneath a lovely clematis covered tree that reminds me of a weeping willow (it isn’t and if anyone can tell me what it actually is that would be ace). The tree creates a “room”  underneath which leads through to the rest of the adventure.

I’m sure my kids would have happily continued to play without me adding anything, but, inspired by this month’s Tots100 Center Parcs challenge I decided to make the inside of the tree into more of a den. The challenge is all about using recyclable materials and the natural environment to create an outdoor hideaway; so I thought what could be more natural than using an existing, living tree? The dense cover of Clematis on top keeps the inside relatively dry while the hanging branches create walls, giving the interior a secluded and peaceful feel. 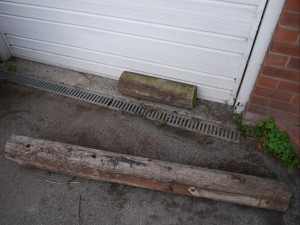 To furnish the inside I decided to make a table and chairs from the pieces of an old telegraph pole that has been sat against the side of our house since we moved in. I used to think it was there for a reason but when my son climbed on it in March and sent it rolling across the lawn I realised that it was actually just abandoned there and getting in the way. I’m a capable if unenthusiastic DIYer so it seemed an easy enough project: 2 pieces for stools and 1 taller piece for a table leg with slices screwed on top to make the table top. When I talked about making a tree house with my son he asked if we could have “sparkly lights” inside so my one and only purchase was a string of multicoloured fairy lights. Originally I was going to get the solar powered kind, as they are the most environmentally friendly, but when I came to buy them I found a fundamental flaw in the idea. The solar powered lights all seem to have the light sensor built into the solar panel – great if you want them on at night, not so great if you want to use them in a dark space during the day; because of this I ended up with some battery powered lights which are controlled with a child friendly button. Although not as environmentally friendly as solar powered lights, rechargeable batteries mean I can use them without adding to the landfills. 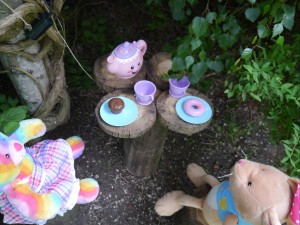 I planned all this out a few weeks ago but my daughter’s birthday has meant that I only found time to start it this week. It was reasonably straight forward, although I have to admit that after cutting up the telegraph pole with a hand saw I’m reminded of why I hate DIY. I don’t think I’ll ever be a carpenter but the table is usable and the stools are a good height for my kiddywinks. The teddy bears certainly enjoyed having a picnic there, and when my son first saw the finished “house” he was very impressed. He had a picnic with his sister using the play cups and plates and when he went to bed that night and we talked about our day one of the first things he said was “I like my house”.

Below are a few snaps of them discovering their furnished tree house for the first time. 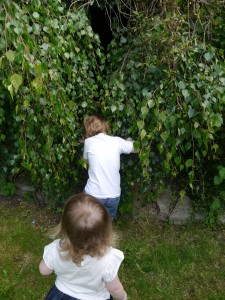 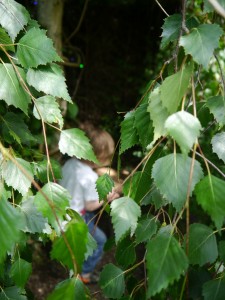 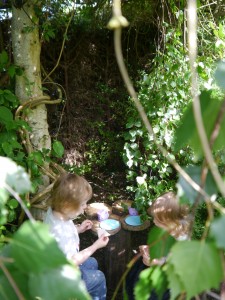 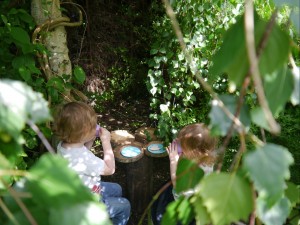 This post counts as my entry into the Tots100 June Center Parcs challenge.