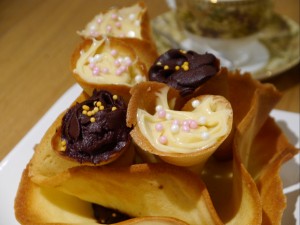 Last week was a bit crazy, 2 blogging meet ups and a trip to the Creative Stitches and Hobbycraft show running at Event City on Friday. The show was full of fabulous supplies for crafty types and was running along side the Woman’s Weekly Live event which included a cupcake decorating session by one of their editors. Sue McMahon demonstrated some easy tips to make stunning cupcakes (perfect as this week is national cupcake week) as well as how to make an easy cupcake bouquet. The bouquet was beautiful and inspired me to think about how you could make an entirely edible bouquet of some sort.

The Creative Stitches and Hobbycrafts show will be returning to Event City Manchester in Febuary just before  Cake International which will run from the 7th to the 9th of March with some fabulous demonstators and guests.

Back to my edible bouquet and at first I thought about baking cupcakes in icecream cones and I will have a go at this sometime but since the Great British Bake Off this week will feature tuile biscuits which I’ve never made I decided to try and make a tuile bouquet to submit to this week’s Great Bloggers Bake Off hosted by The crazy kitchen and Mummy Mishaps.

Tuile bisuits are basicly egg whites, sugar, butter and flour. Wikipedia says that they’re traditionally flavoured with almonds but the recipe I used flavoured with vanilla which is great as far as I’m concerned. They’re supposed to be curved to resemble the roof tiles in Provence. To make the bouquet I made 2 bowls and several cones instead of curving them.

The recipe I used was from a site called Fine Cooking and you can find it here. I spent a bit of time figuring out what the amounts would be in grams as cup measurements make me nervous. The weights I used in the end are as follows:

2 large egg whites (don’t whip them, I didn’t look at the recipe so we ended up with bonus meringues for lunch on Sunday)

I filled a piping bag with sugar and tied it off with a hairband to make a cone for moulding my tuiles. (Make sure it’s not going to melt the bag with the heat of the biscuits though!)

I wanted to pipe roses into the cones so I made up some white chocolate ganache and also some dark chocolae orange ganache.

For the white chocolate ganache:

The mixture took a while to set enough to pipe and I would be temped to use a little less cream next time. I used shot glasses to support my cones while I piped.

For the chocolate orange ganache:

I used the same method as above but substituted dark chocolate of white. The mixture wasn’t as smooth as the white chocolate and I’m sure chocolate experts could tell you what I did wrong. I added a good splash of Cointreau to get the orange flavour so this won’t be going to my kids

Finally I used the dark chocolate ganache to sit one tuile bowl inside the other and to fill the remaining cones. I seem to have spent this recipe running out of things. Because of a few false starts with the tuiles I didn’t have as many cones as I wanted and because I’m not too familiar with piping ganache I used too much and began to run out of that also! The end result looked pretty but would have been better with more cones 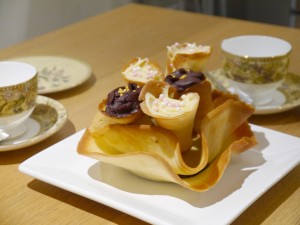 Oh and these are the meringues we ended up with when I whipped the first egg whites like a numpty! 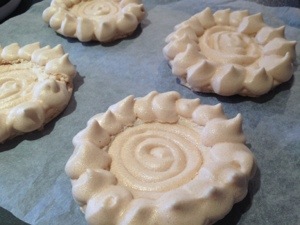 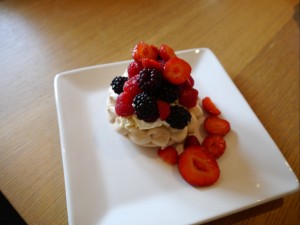