Easter’s a brilliant holiday for kids, we always try and make time to do something creative. Last year we spent a day making a home made Easter Tree, this year I wanted to have a go at making our own Easter eggs. I bought the mould a while ago from Lakeland using some birthday money and have been looking forward to having another go at moulding chocolate ever since I made a Chocolate Christmas tree  Piñata for my husband to take to work.

We started by melting 200g milk chocolate (Belgian cooking chocolate) in a microwavable bowl using 15 second bursts ans stirring in between. Once the chocolate was melted I added another 100g of broken up unmelted chocolate and stirred until the chocolate was cool to temper it. Next I gave my 2 year old a silicone pastry brush and let her pain the chocolate into the egg mould. Once both halves were coated we put them in the fridge to set before adding a 2nd layer of chocolate. The moulds then went back in the fridge to set the second layer before we turned out our egg halves. Some mini eggs went inside and we joined the two halves together with the last of the melted chocolate.

Now every egg should have a nest to sit in so I decided to make one from chocolate cake. I used a bundt tin and then turned the cake upside down to make the nest shape. To give a slightly different flavour to the cake I used golden castor sugar instead of normal white castor sugar. I then decorated the cake in the same way I decorated my mini easter nest cake a few weeks ago using a piping nozzle usually used to produce a grass effect.

Ingredients for the chocolate cake

To decorate the cake I used a variant on my standard vanilla frosting by adding 20g of cocoa powder to it and a little extra milk to keep the consistency the same. I first turned the cake upside down and coated the moulded base of the cake with a palate knife before using the piping nozzle to pipe a twig effect all around. I then Turned the cake right way up again so the flat surface was uppermost, placed it on a cake board. I used a palate knife and the nozzle to decorate the top.

I was all set to put our egg in the nest when my son said that chickens sit on nests so where was the  chicken? So inpsired by the #eggsperiment hashtag on twitter we decided that the egg should become a chicken. I used a fondant leaf cutter to make the feathers and mixed some royal icing to attach them to the egg. Finally I made a fondant head and some estra fondant decorations. Everything on the cakeboard is edible including the fondant eggs next to the chicken.

This is my entry to the Center Parcs and Tots 100 April challenge. If I’m chosen, I would like to visit Sherwood forest. The challenge is to create an edible nest and there are some great suggestions over on their blog including my favourite (something I remember doing as a child) of mixing cereal such as shreaded wheat with melted chocolate to create realistic looking chocolate nests. 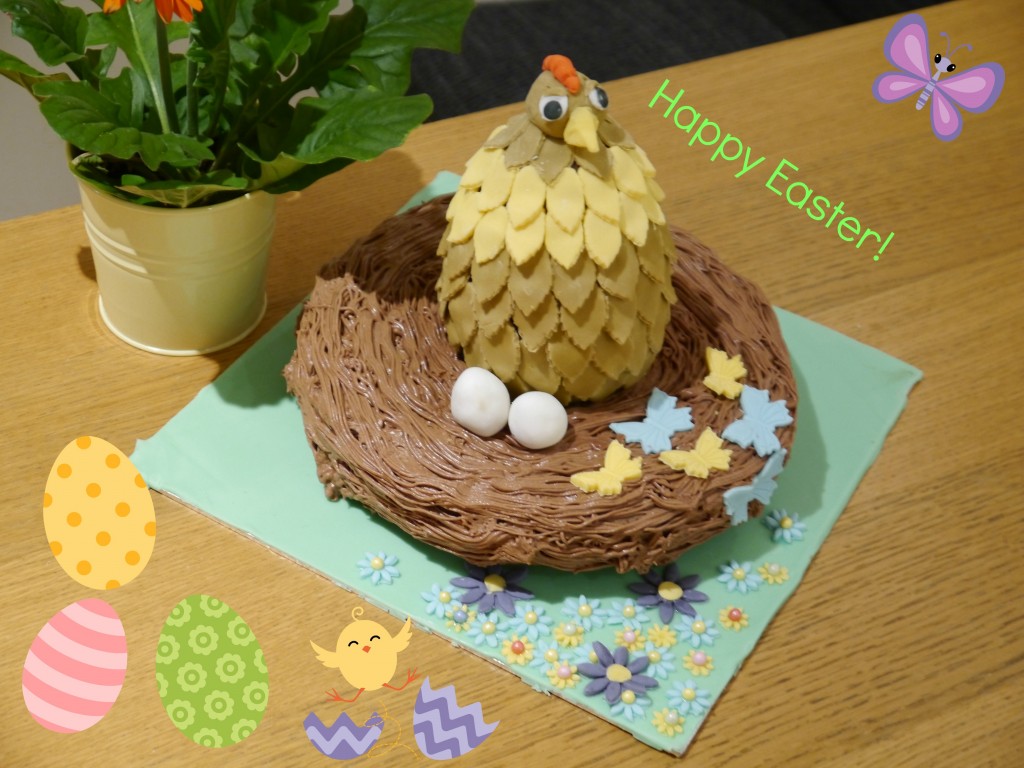