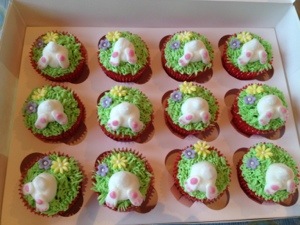 This weekend the Mad Hatter had a tea party in Chester. It was a charity event to raise money for a 2 year old little girl called Anya who desperately needs treatment in America for and aggressive form of cancer called neuroblastoma. Sadly we couldn’t attend as we had already booked an amazing day out at Chill Factore and Sea Life Manchester but I wanted to contribute something as I Anya is so close in age to our own daughter. I spotted on Friday morning that there was a cake baking competition so decided to make some cupcakes and a chocolate cake.

For the cupcakes I chose white rabbits going down the rabbit hole (what could be more appropriate?). I used my standard cupcake recipe and decorated them with vanilla frosting and fondant. Rather than write out recipes repeatedly I’ve now added dedicated posts for the recipes – just click the links above. Instead here is how I made the decoration: 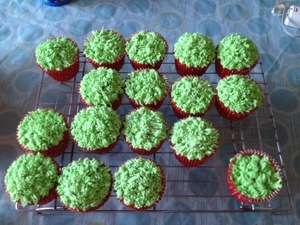 First I coloured the frosting with green gel colour and placed it in a piping bag with a nozzle that has multiple openings. This one is Wilton number 233 but there are lots of options out there. It was the first time I’d used this nozzle although I’ve actually owned it for about 2 years. As always make sure there are no air bubbles trapped in the piping bag and twist the top before applying gentle pressure. I found that starting with the nozzle just above the cake and then lifting upwards before releasing the pressure worked best.

Once the grass effect was done I used white ready made fondant to make the decorations. I worked a little normal icing sugar into the fondant to make it a bit less sticky, then formed 6 small balls by rolling them between my hands. I cut each in half to make 12 hemi-spheres (I don’t think I’ve used that word since school). 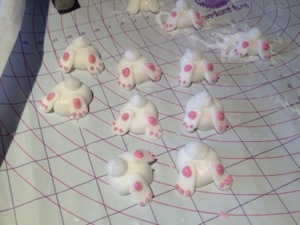 Once I had the rabbit’s bottom I needed to add feet and a tail. For the tails I used a small open star nozzle and normal icing sugar mixed with a small amount of water to a consistency where it would hold it’s shape when piped. (You could use royal icing as an alternative if you wanted it to set to a hard finish). I Piped on the tails in the same way I made the grass frosting and used a small paintbrush dipped in water to flatten any peaks. Next I made the feet. I used a baby feet patchwork cutter and stretched the fondant a little to make them look more rabbity. I used edible glue to attach the feet to the bottoms and then mixed up some thick pink water icing (again I made sure it would hold it’s shape) and used a fine nozzle pipe the pink pads onto the bottom of the feet. Again I used a damp paintbrush to flatten any peaks of icing left behind. 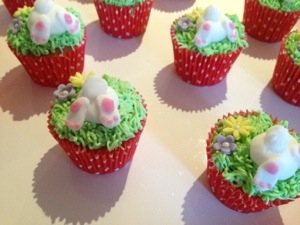 I used a little edible glue to attach the bottoms to the cupcakes and placed them slightly off centre. Finally I worked a little yellow and purple gel colour through small amounts of the white fondant and used plunger cutters to make small flowers. I used the end of my paintbrush to make a dip in the centre of each flower and used a bit more edible glue to add sugar pearls.

I also made a toadstool cake with the Alice in Wonderland caterpillar on it. The tutorial for that is here.

The cupcakes won the competition which I was so pleased about as I’ve never won anything before, however that wasn’t really why I entered. The Anya Bentham Appeal is unusual in that it is running for a limited time. While other children were having fun last weekend she was undergoing a bone marrow transplant which starts a 3 month countdown until it will be too late for her to receive the treatment she so desperately needs. If you are inspired to make these cakes I wonder if you could donate something (anything) towards the appeal? As of today they have raised £193,071 of the £250,000 they need. They have raised an amazing amount but still need that final bit of help to give Anya life saving treatment. Their just giving page is http://www.justgiving.com/appeal4anya or you can text ANYA99 and your amount £1 – £10 to 70070. Thank you. 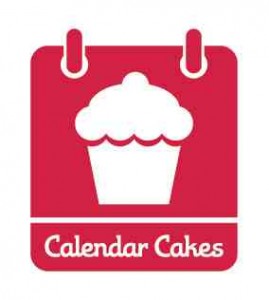 I am adding this post to the Calendar Cakes blog hop for September as the theme is cupcakes. It is run by the lovely Dolly Bakes and Laura Loves Cakes