A few weeks ago I wrote about my Easy Red Nose Cupcakes for Sport Relief and The Team Honk Great Blogger’s Bake Off hosted by the lovely Jenny Paulin. Today I decided to have a go at making a celebration cake as the Team Honk relay baton recently made it all the way from Lands’ end to John o’ Groats raising an amazing £31626.00 along the way. This is a red velvet and vanilla sponge cake, there are red noses hidden in the bottom layer and the top layer is in the form of a chequered flag to celebrate reaching the finish line. I copied Kimberley from GBBO to make the chequered pattern but added frosting between the circles to help hold the cake together.

The main decoration on the cake was a map of the route the Team Honk Baton took. I added signs for Lands’ End and John o’ Groats, and runners starting off and celebrating at the end, both holding the baton. I added water icing writing for Team Honk 2014 and Sport Relief.

To make the red noses in the bottom tier I baked some small cake balls using a silicone mould and a red velvet cake mix, I ued the remaining red velvet batter to make the first layer of the top tier.

To make the chequered pattern in the top tier I cut both layers into concentric circles and created an alternating pattern. 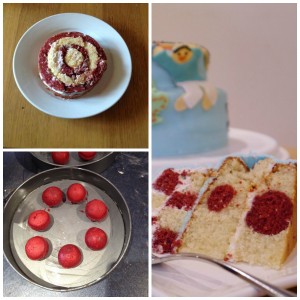 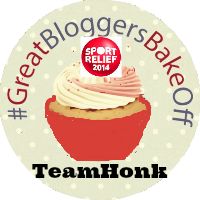