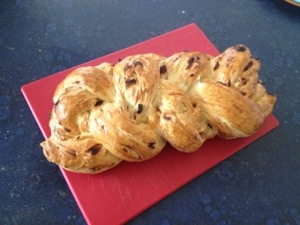 I do like making bread and got a little bit obsessed a couple of months ago, at one point I was making it every other day. The best decorative loaf I made was in the shape of a monkey’s fist knot but they were all either plain white or plain wholemeal loaves. This week on the great british bake off was bread week and I wanted to make something a bit different and adventurous for my entry into the great bloggers bake off. I had a think about recipes I’ve seen recently and decided to make a loaf based inspired by Justine Forrest’s recipe for breakfast cookies which I scribbled down at the Tatton Park Foodie’s Festival a few months ago. The cookies were cranberry and orang and delicious. I decided to add cranberries, and orange zest to my normal white loaf recipe, along with a couple of tablespoons of castor sugar.

Normally I make a simple plait for my white bread but this time I tried something a little fancier (inspired by Pintrest of course) and instead of making a normal 3 strand plait I split one of the strands into 3 and pliated that before adding it into the larger plait. I’m not sure it’s obvious in the pictures and next time I might do 2 mini plaits and one plain. Anyhooo, the recipe is below if you fancy having a go, all the adults liked it but the kids rejected it on the grounds that it had lots of bits in it. 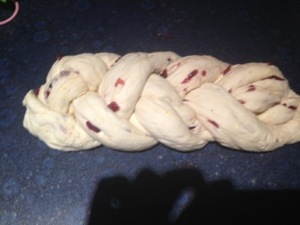 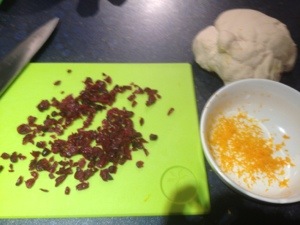 This post is linked to the great bloggers bake off hosted by The Crazy Kitchen and Mummy Mishaps. I’m also linking to November’s Tea Time Treat’s hosted by Karen and Kate.