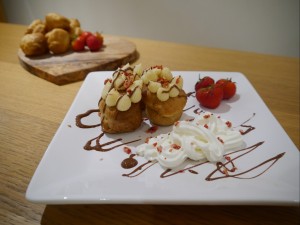 It wasn’t looking good for me this week when it came to entering the great bloggers bake off. We’ve been infected with the dreaded chicken pox and small demanding people have been taking up most of my time. I did manage to make some halloween cupcakes but nothing else.  However, when I saw a link to Mary Berry’s Religieuses on twitter today I thought I’d have a go at choux pastry. I’ve never made it before but have seen it made on GBBO and Australian Masterchef, usually accompanied by stressed looks and swearing. It turns out it was pretty painless. I started at half 8 and had made the buns and crème patissiere by about 10. I decided not to do full on nuns but to do some fallen angels (made up name)  – basically profiteroles with milk chocolate added to the crème patissiere and normal vanilla crème patissiere for a halo. 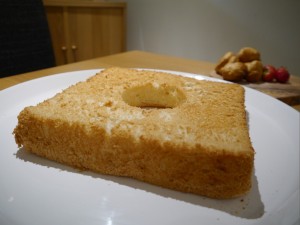 Wonderful, all sorted. Time for bed? Well I had 6 egg whites left over so naturally what else are you going to do at 10pm but make an angel’s food cake? (With a square tin and a cocktail shaker in the middle to make the hole).

For the choux pastry:

Preheat your oven to 220c

For the crème patissiere: