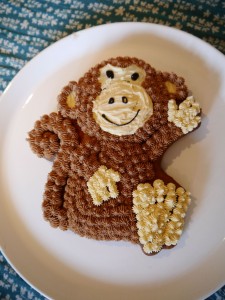 Yesterday I spent the afternoon baking with my kids. My daughter chose to make Easter nest cakes while my son wanted to make a “big cake”. We used the same cake mix for both, taking out a little for the Easter cakes then using the rest in our Wilton Monkey Cake Tin which I bought for a joint 1st birthday party a few years ago. There was plenty of space in the tin when it was filled so it would also work using the entire batch of cake batter in this tin.

We used vanilla and chocolate frosting to decorate the cake with a star nozzle and a piping bag. I coloured a little of the vanilla frosting with an ivory gel colour to use on the hands, feet and muzzle. I also used some left over ready made writing icing for the details on the face.