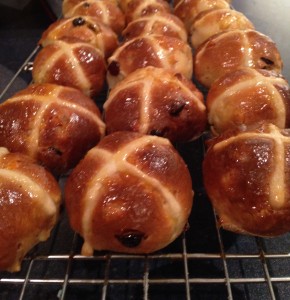 Apparently hot cross buns are supposed to be eaten on good Friday (the end of lent). I’m clearly a rebel because I made them on the Wednesday night and took them to work on the Thursday. This was my first ever attempt at hot cross buns and I think they look pretty good considering, I combined a couple of recipes I found online to produce my very own version.

Write a review
Save Recipe
Print
Ingredients
For the first prove
For the second prove
Mummy makes cakes http://jaisee.com/mummymakescakes/