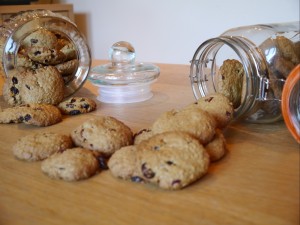 In our ongoing attempts at potty training we have a reward system where there is a treat at the end of the day if there are no accidents. The problem is that this has to be balanced against a big sugar rush at bedtime so I try out different recipes with reduced sugar content to see which are successful. This week I tried oaty cookies. I adapted a recipe by reducing the sugar, adding extra oats and trying different dried fruits. I split the mix in two and added sultanas to one half (popular with the kiddies) and dried cranberries and orange zest (popular with the grown-ups) to the other half.

1 and a half tsp vanilla extract

three quarters of a tsp salt

Linked to the great blogger’s bake off run by Helen and Jenny.