As part of #MotivationalMonday Pinkoddy is running a linky for Christmas in July. This is my first time joining in and I thought I would share my Christmas cakes from the last few years in the hope that they will inspire someone. It’s a bit of a learning journey and I hope you’ll agree that I’ve got better with time!

We moved into our house in November 2008 and have hosted Christmas here ever since, either for my family or my husband’s. It was after moving into this house that I really started getting into cake decorating – probably something to do with having workspace that didn’t double as a hob. The first year we had only been in a few weeks. I know I made pavlova but I can’t for the life of me find a picture of it. The next year I did a massive chocolate cake with some basic sugar craft bits and bobs on top to make a winter scene- this was my first try at sugar craft – the tree was built around a mini-flake to make the trunk, there were presents underneath, a snowman and a lake. (Apparently I only took a picture of it when it was in the fridge). 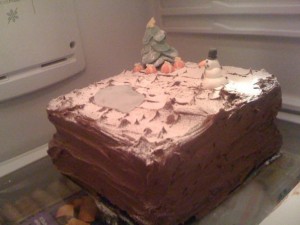 That was the first year after our son was born, we had a buffet style party for a load of friends so I needed a BIG cake.

Next came Christmas 2010. Our son was 1 and I was pregnant with our daughter (spot the anti-nausea wrist bands). I made pavlova and was learning to pipe icing onto cupcakes. Again no good photos, the best I can find are these two – both of me looking far too overweight – (pregnancy shouldn’t be an excuse to eat everything in sight but I failed big time at that theory twice). In the first picture the bottle is hiding some patchwork cutter snowflakes on the cakes – they didn’t work very well – Christmas is becoming a time for first tries but they tasted good. 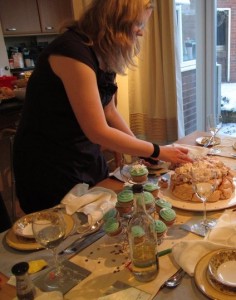 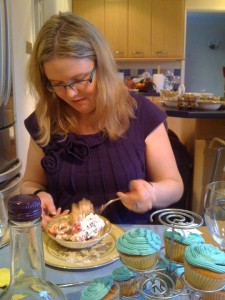 2011 was a Great British Bake Off inspired year, one of the challenges was for Croque en Bouche – no I didn’t make one – I made a Gingerbread house inspired by the one underneath the black forest inspired entry. This one I have got photos of, courtesy of my husband who was fascinated with it. You’ll notice that one of the gable ends has a sugar window at the point, this is after my then one year old son walked into the lounge casually eating it after climbing up to take it off the cooling racks. 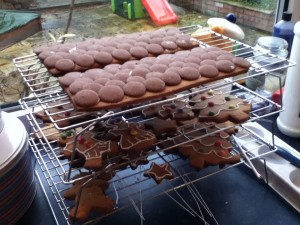 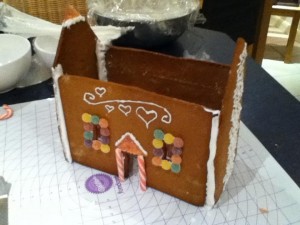 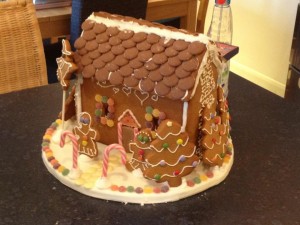 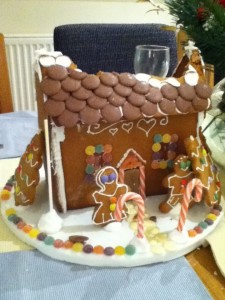 It was my parents who came to dinner that year and they were very impressed with the house. It got demolished over about 3 days with the added help of my husband’s family. My son loved it although my 6 month old daughter probably wondered what all the fuss was about.

Finally we come to last Christmas, 2012. I did consider not bothering due to the end of the world but when it failed to show up on time I thought I should make an effort. I spent quite a while on Flickr as I hadn’t yet discovered Pintrest and decided on a night sky scene with Santa’s sleigh. I also wanted to have a forest of cupcakes underneath. 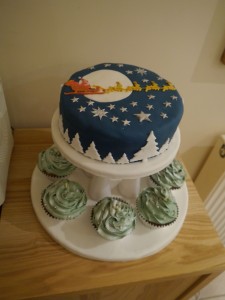 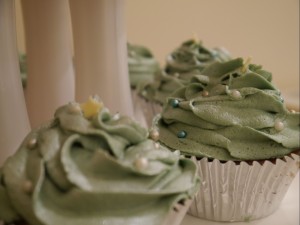 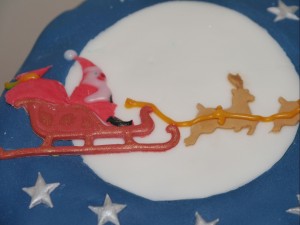 So that’s it, my Christmas cakes for the last 4 years. I have to admit it’s been quite nostalgic looking back on them all and I got side tracked a few times looking at pictures of very tiny babies. I hope this helps inspire someone for Christmas this year. Linking up with #MotivationalMonday and Christmas in July.