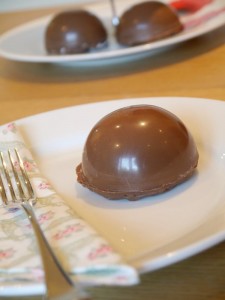 I love chocolate teacakes – the marshmallow is that sticky gooey texture that is somehow so much nicer than the denser individual marshmallows. When they made them on the Great British Bake Off last year I instantly wanted to try making them and bought a silicone mould which has since been sitting sadly in the back of my baking cupboard waiting for an outing. I came across this mould the other day while having a sort out and decided to finally have a go at making them.

A couple of weeks ago I was sent some samples of the latest flavour of that classic dessert Angel Delight so I thought I would have a go at combining this with the marshmallow as a bit of a twist on the old recipe. The new flavour is bubblegum and really does taste like those vivid blue drinks we used to have in the 80′s and 90′s. I also wanted to make some traditional teacakes so I split my marshmallow half and half. Of course you could just make your Angel Delight up the nostalgic way with milk – there’s even instuctions on the packet to make it into a smoothie, but if you’re feeling a bit more adventurous why not give this recipe a try?

The bubblegum flavoured marshmallow didn’t set as well as the traditional marshmallow – probably because of the oil in the angel delight, but after a couple of hours to set it held it’s shape relatively well. Below you can see both types of teacake cut open to compare, although the colour doesn’t show particularly well the angel delight marshmallow has that classic pink colour to it. 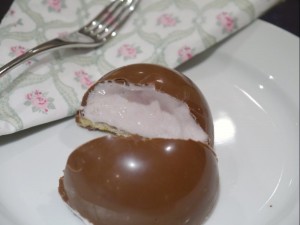 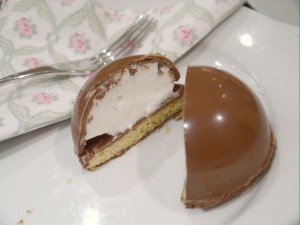 This recipe consists of 3 separate processes, making the biscuit bases, making the marshmallow and tempering the chocolate. As well as the ingredients you will need: A silicone pastry brush, a silicone teacake (or at a pinch cupcake) mould, a circular biscuit cutter slightly smaller than the diameter of your teacake mould, a disposable sandwich bag. 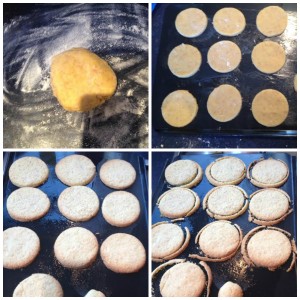 2 egg yolks (keep the whites for the marshmallow later)

For the marshmallow (enough for 6 teacakes because I only had 1 6 teacake mould- double if you want to use all 12 bisciuts): 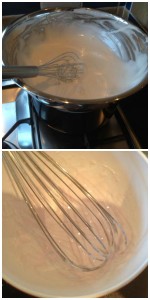 1and a quarter tablespoons of glucose syrup (sometimes called glycerine this is available at pharmacies, alternatively you could use golden syrup)

To make the chocolate shell (for 6 teacakes): 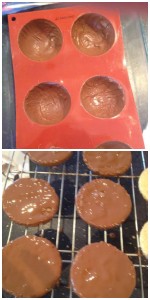 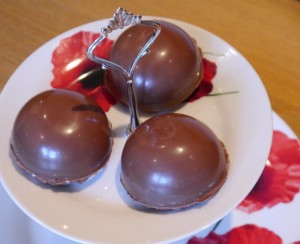 This post is an entry for #AngelDelightMoments Linky Challenge