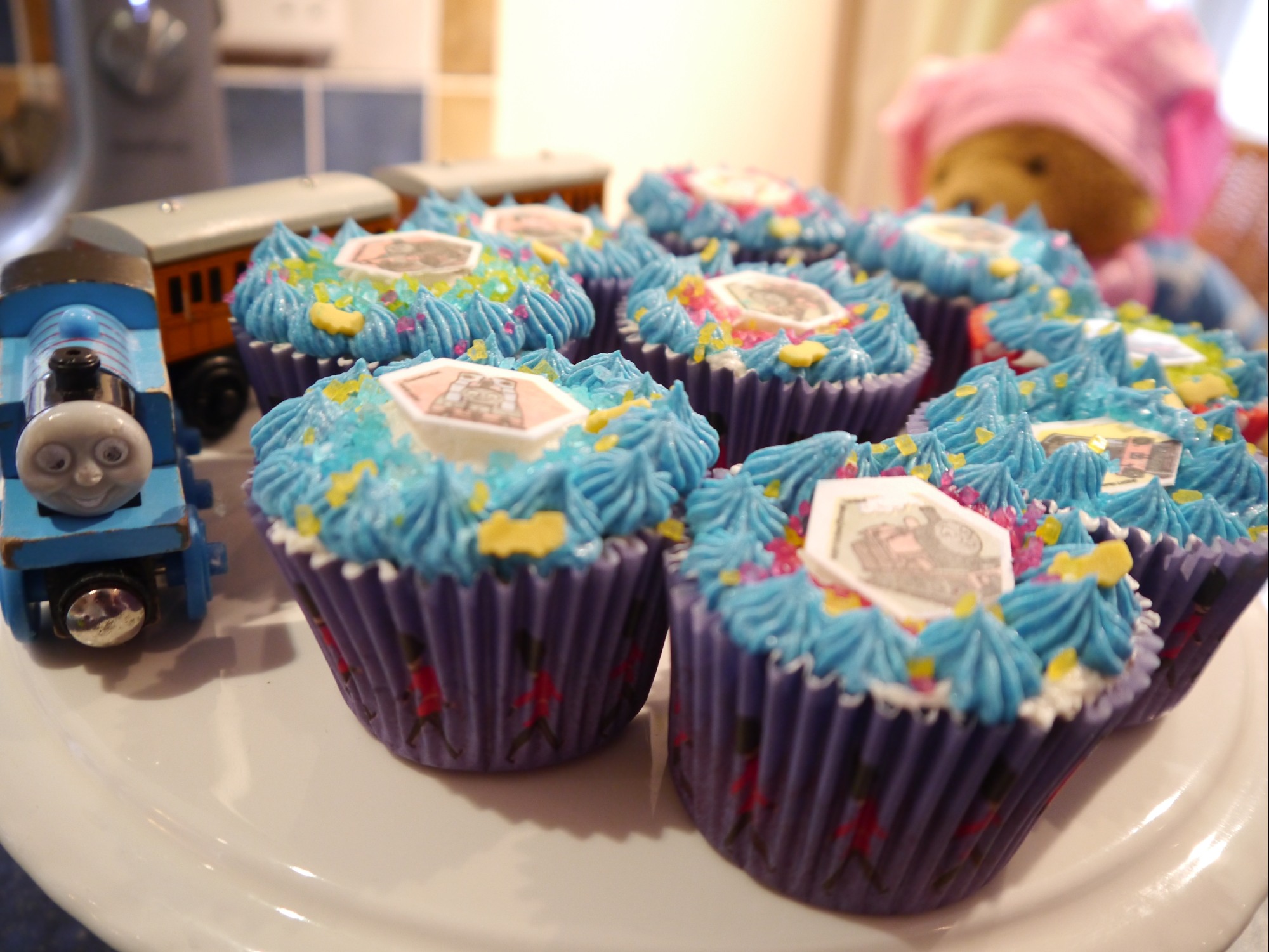 It’s national cupcake week this week and I couldn’t let it go by without making some sort of cupcakes. We decided to stay home today because let’s be honest it’s miserable outside and also I have a cold. This meant I needed to come up with something to do with the kiddies so we decided to make Thomas the Tank Engine cupcakes with (the very appropriately named) Spencer Bear who has come to stay with us for the week from nursery.

Since we went to Thomas Land for my son’s 4th birthday he has been very excited about making Thomas Cakes with the cake mix in our goody bags. Now although the package is perfect for anybody who doesn’t bake and wants to make something with their kids I couldn’t quite bring myself to use it. Instead I used my own vanilla cupcake recipe, and vanilla frosting recipe. The only part of the box we didn’t use was the actual cake mix, we used all the edible Thomas and Friends pictures and the train sprinkles, the icing sugar went towards the 250g I needed to make the frosting. 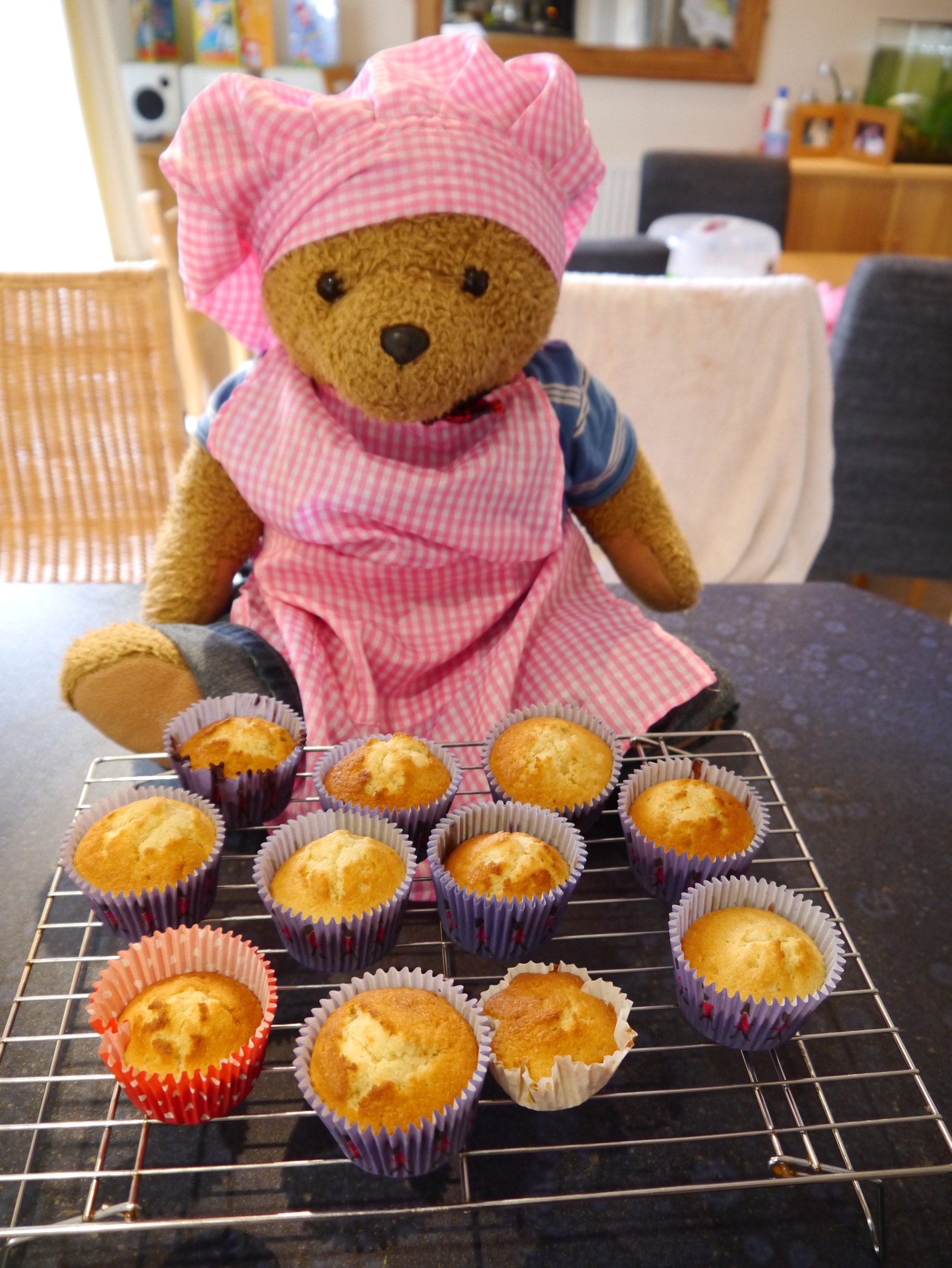 My kids love weighing out all the ingredients and mixing them together. I use it as a chance to read numbers on the scales and talk about if we need more or less to get to the right number. They “helped” me to make the cake batter and put it into cases, then coloured in the activity sheet in the box and had their lunch while we waited for the cakes to cook.

While the cakes cooked and then cooled I made the frosting and added blue gel colour to half of it. I put the blue frosting in a piping bag with a small star nozzle and left the plain frosting in a bowl.

First we spread the uncoloured frosting on the cupcakes and put an edible Thomas and Friends picture in the middle. My son (of course) chose Thomas and my daughter chose Percy. I added blue frosting round the outside and they chose decorations to put on. Both chose to use 1 of the train sprinkles that came with the box before choosing which colour of neon sprinkles to use (these are something I spotted in Sainsbury’s this week and have been itching to use :)). My son wanted blue because Thomas is blue and my daughter chose the pink ones. I managed to get a quick snap of each cake before they were eaten. 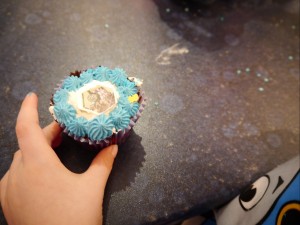 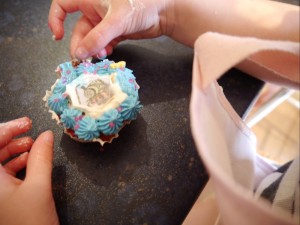 Once my kiddywinks had decorated and eaten their cakes they went off to play in their playroom. This meant that I had chance to decorate the remaining cakes in a slightly more controlled way. I used a palate knife to cover the tops with an even layer of uncoloured frosting. Next I added the edible pictures and piped the stars around the edges. I added a train sprinkle to each one and finally filled in the around the pictures with neon sprinkles, adding a contrasting colour on top of the piped stars.

Dolly Bakes and Laura Loves Cakes linky Calendar Cakes is all about cupcakes this month so I’m adding this post to the list.