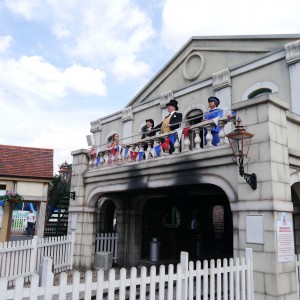 My son is a huge Thomas the Tanks Engine fan. He was given some engines and DVDs for his second birthday and never looked back. If I let him, he’d take his engines with him everywhere we go. This week we were offered the chance to visit Drayton Manor theme park near Tamworth in Staffordshire which is the home of Thomas Land. It was perfect timing as it was my son’s 4th birthday, only slightly complicated because we were on holiday in Center Parcs Nottingham. After dithering about it for a bit we decided that it would be an amazing birthday treat for him, so we drove down on Wednesday morning and back in the evening.

When we arrived in the car park we could see Cranky the Crane over the trees, my son was so excited as we went in through the main entrance and then turned into the gates to Thomas Land. We saw Percy pulling his mail cars on the miniature railway and Sir Topham Hatt and Mr Percival were singing a song on the balcony above. Next we went for a ride on 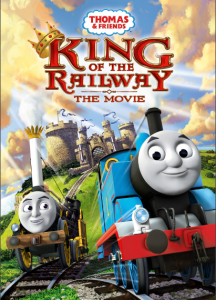 the  Lady roundabout before heading over to the 4D cinema for a special showing of the new Thomas film King of the Railway including bubbles and a surprise water spray! Both my kiddies love the film and have been watching it on DVD repeatedly since Wednesday, it follows on from Blue Mountain Mystery and has several new engines including Stephen, a very old engine who is brought to the island to do a very special job. King of the Railway is available to buy on DVD from 1st September along with lots of related products ready for Christmas

After watching the film we spent the rest of our day exploring the park. We rode on Winston, the Fat controller’s track inspection car, my daughter went for a flight with Daddy in Jeremy the Jet engine and we all to a trip from Knapford Station to Tidmouth Hault Station pulled by Percy. There we found Spencer’s Activity Playground which the kiddies adored running around. There was also a little model railway exhibition and a dinosaur trail.

We rode back to Knapford station in Thomas’ train and my son took a photo of him for a photography competion he is entering. I might be biased but I think it’s pretty good 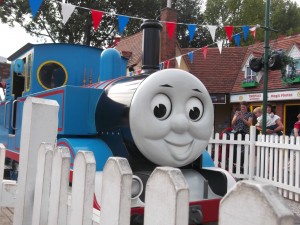 We didn’t make it round the whole park this time, there was a big wheel I would have loved to ride on and a log flume that I can’t wait to take the kiddies on when they’re older. We did have a ride on the vintage style carousel (one of my alltime favourite rides) and just caught the last lake cruise of the day. We were the only people on the boat and it was beautiful and peaceful. My son again took the photo and I’m pretty impressed. 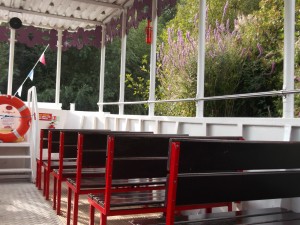 Because we were already on holiday in Center Parcs we did the whole trip in a day, however when we visit again in the future we are hoping to stay at the Drayton Manor hotel. The hotel is located right next to the park and has family rooms including the option for a Thomas themed room with character bunk beds and hand painted themed walls for the kids and a more grown up section for the adults. They have also just unveiled a new £50,000 adventure play area in the hotel’s grounds, perfect fr keeping small people entertained.

With spectacular fireworks displays on the 2nd and 3rd of November and the Magical Christmas events starting on the 15th of November we are struggling to decide when to go back. The Fireworks displays will be at 7pm with late opening of the park until 9pm. The Magical Christmas event will be open Fridays, Saturdays, Sundays and Mondays from Friday 15th November to Monday 16th December, then every day from Thursday 19th December – Monday 23rd December and Friday 27th December to Sunday 5th January 2014 there will even be a Polar Express experience running in the 4D cinema, based on the fun we had watching King of the Railway I expect you will have the seats moving as the Polar Express thunders down the track before something magical happening at the end.

I really recommend this as a day out, we had a fabulous time. There’s lots to do and if you are looking for a special Thomas toy to take home I’m sure you’ll find it in the huge Thomas shop.

We were given free entry to the theme park for the purposes of this review, all opinions expressed are my own.