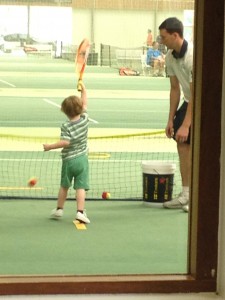 In my ongoing quest to keep my little horrors entertained I decided to start my son in the Tennis tots class at our gym. He had just turned 3 and they run a tots class for 3-4 year olds which feeds into the older classes. Its a combination of games and pair work that I was very keen for him to do.

The first few weeks were great, he loved it and was excited to go. Then after a month he announced “I can’t like tennis”. In order to understand this you probably need to know that in my son’s vocabulary can’t is interchangeable with don’t. We kept trying for a few weeks but when he started walking out halfway through we decided to let him have a break for a few months and try again when he was a bit older.

Fast forward to this January and we tried again. Apparently he still couldn’t like tennis and wanted to go home, but when he did join in he was running round having a great time. Then he would remember that he couldn’t like it and walk out again. I think the problem is that at 3 years old you don’t really understand that to be good at something you need to practice. My son seems to think that if he can’t do something straight away he’ll never be able to do it. We finally sorted this out two weeks ago when he was sitting with me by the court (I’ve had to go in with him for the last few months) and he told me that it was too hard and he never wins. My heart broke a tiny bit at this because he was so sincere about it. He genuinely thought he would never be able to do it and would never win. So we had a little chat and I explained that the reason he never won was because he was always sat with me. If he would just join in with the others he would get better and then eventually win sometimes. To be honest I didn’t expect this to work, I’m so used to thinking of his as too little to understand things, that I thought he would just ignore me. His response floored me. “Really?” sounding a bit excited, “Ok mummy”. He went to join in with the others and did the whole lesson. The next week he still wanted me to come in but went quite happily and did the whole class. This week we went in, I sat down for 2 minutes then tried sneaking out. He didn’t bat an eyelid, just carried on playing. I got to sit outside the window with a coffee and watch him play. He is definitely improving and his teacher is very happy with his progress.

The main thing I’m taking away from this is to talk to my son. A bit of reasoning did more in 5 minutes than weeks of trying to make him join in. I don’t want to be one of those mums who makes their children do activities they hate, if I’d genuinely thought my son would never enjoy tennis we would have stopped going months ago, but the glimmers of enjoyment were there; he has good hand eye co-ordination and when he forgot himself had a great time. As parents we know our kids and should have faith in our instincts about when to stop something and when to keep going.