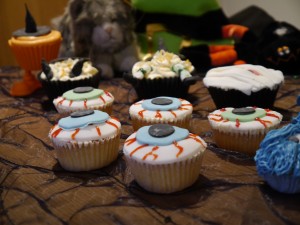 A few days ago I wrote a post about making Room on the broom inspired cupcakes for Halloween. At the same time I also made a selection of more traditional monster cupcakes that you could easily do for a kiddy party. As with the Room on the broom post these could all be done with an 8 colour gel paste selection (mine is Wilton) and basic equipment. The  cupcakes and frosting were made using my standard recipes and the decorations were made with a mixture of coloured frosting, coloured ready to roll fondant and coloured flower and modelling paste.  I bought the black flower paste pre coloured as it takes a lot of colour to get a true black but you could colour it yourself if you prefer. I made Witches, a Mummy, Eyeballs and Hairy blue monsters. 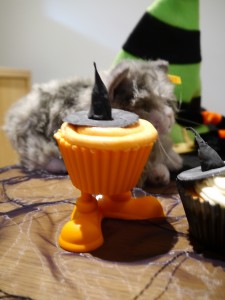 I used the my orange silicone cupcake cases with feet to bake the cupcakes and used orange frosting which I piped in a spiral.
To make the hat I used ready coloured black floral paste. The floral paste dries harder than normal fondant meaning it won’t go floppy (as long as you don’t seal it in a biscuit tin which traps moisture).
Cut out a circle for the base of the hat. I don’t have the right size cutter so use an upside down shot glass. (From my pre-kiddie days)
Mould a blob of paste into a cone for the rest of the hat. To make the sharp tip I just pulled the point upwards. 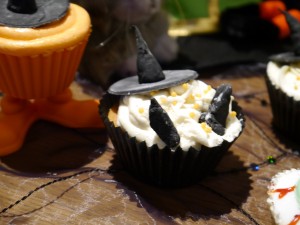 While browsing pintrest for ideas I spotted a brilliant cupcake where a witch had fallen in it. To recreate it I used a large star nozzle to pipe a spiral of uncoloured frosting and added some orange sprinkles. I added a hat to one side of the cakes and made legs to go on the other side. I made 1 long set of legs and used a paint brush to add gel colour stripes, for the other witch I made shorter legs meaning only the shoes could be seen. 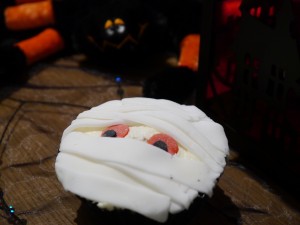 The mummy cupcake is very simple to do.

To make the eyes cut out some small black circles and slightly larger red circles. Stick them together using edible glue or water.
Spread a layer of frosting on the cupcake and attach the eyes, then add the bandages. Ideally use a ribbon nozzle to pipe frosting bandages across the cake, sadly though I don’t have a ribbon nozzle (yet) so instead I cut strips of white fondant. Lay them across the cake until only the eyes peep through.

To make the eyeballs extra spooky I added strawberry jam to the middle of them. Insert a long nozzle into the centre of the cupcake and squeeze in the jam until it begins to come out of the top. 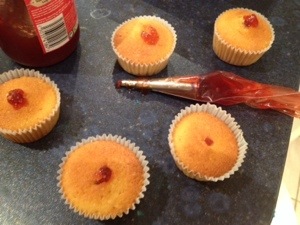 Spread a layer of frosting on top and add a circle of white ready to roll fondant. (I used an upside down glass to cut mine out as I didn’t have a cutter the right size).  Add some red water icing lines with a writing nozzle to make the eye blood-shot. (I had some icing pens left over from my son’s birthday party where I got the kids to decorate their own cookies so used that).
Cut out a coloured circle for the iris and a smaller black circle for the pupil. Attach with a dab of water or with edible glue. 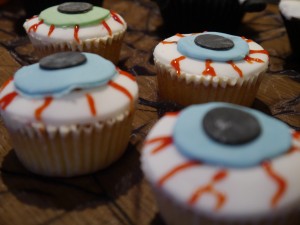 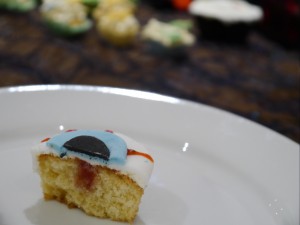 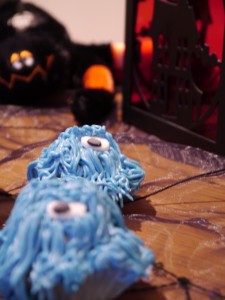 I made some mini cupcakes in petit four cases and my new mini-muffin tray that I’ve been waiting to use.  I added a star of frosting to give the monster some height (a blob added with a teaspoon would do as well) and then used a nozzle that makes a grass effect for the blue hair. I added the front portion of hair then added one of the eyes I made earlier. Next I added the rest of the hair to create a hairy blue maonster.