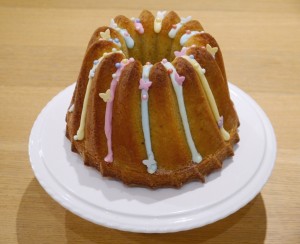 It’s been a while since I made a large cake, recently I’ve made a lot of cupcakes and biscuits but this week I decided I wanted to make a pretty springtime cake using one of the lovely silicone moulds sent to me by Mein Cupcake for review. You’d be forgiven for thinking they were bundt cake moulds however they are described as gugelhupf moulds. After a visit to wikipedia I can reliably state that gugelhupf is an alternative name for bundt cakes and is used in southern Germany, Austria and Switzerland. Anyway regardless of their name they look lovely and are a great way to make a stunning cake with very little effort.

The important thing when making this cake is to make sure the cake mould is completely greased with butter and then coated in flour before filling with the cake batter. Use greaseproof paper to spread the butter at first but then use clean fingers to make absolutely sure the butter is in all the nooks and crannies including the central pillar. Once the butter is done sprinkle a few spoonfuls of flour in and tilt and tap the mould until everywhere is covered in flour. The bright purple silicone of thee moulds makes it really easy to see any spots you’ve missed.

For neatness I use a piping bag to fill the mould with cake batter but pouring from a jug or spooning works also. Tap the filled mould gently on the worksurface a couple of times to remove any bubbles. 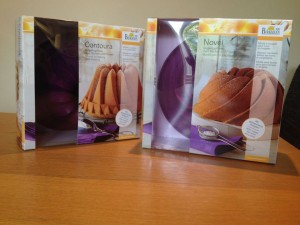 The booklet which came with this £15.25  Contoura RBV Birkmann Gugelhupf Silicone Mould has recipes to use with the  mould, alternatively the recipe below is for vanilla cake. The booklet supplied used 5 or 6 eggs in it’s recipes, I found that a 6 egg mix filled the main part of the cake mould however I increased the mix to 8 eggs to include the detail at the base. I really love the end result with simple clean lines and minimal decoration. Mein Cupcake is a german store who are expanding into the uk and have loads of lovely products. In addition to this Contoura mould they have also sent me a Novel mould from the same range which I am looking forward to trying soon. 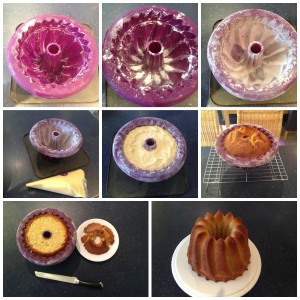 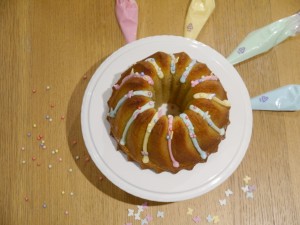