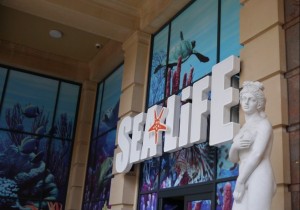 On Wednesday we were lucky enough to be invited to a sneak preview of the new Sea Life Centre opening in Manchester’s Trafford Centre on the 6th of June. The Sea Life Centre Manchester is the latest addition to the Merlin group and as well as being able to buy tickets it will be open to Merlin Annual Pass holders. It is located next to the Legoland Discovery Centre in Barton Square and it will be possible to buy combined tickets for both attractions.

25 blogging families were invited to have a sneaky look at the amazing creatures and displays that staff are working hard to prepare for the grand opening next week.  My husband took the afternoon off work to meet up with us and we pottered along to the entrance for 2:00 after watching the lovely Katy Ashworth from cBeebies performing on the main stage in The Orient.

We were all excited and my son couldn’t keep still but we did manage to snap a quick photo in between the running around.

The entrance to the Sea Life Centre is wonderfully atmospheric with a state of the art sea themed introduction unlike anything in other Sea Life Centres to date. After watching the introduction the doors open into the main part of the building and the underwater tour begins…

The first room we entered had a shoal of silver fish circling us, the colours and the movement all make you feel like you are truly under the sea.

Moving on through the displays we saw some beautiful (and some slightly scary) marine creatures, from Moray Eels to Seahorses.

The way the glass tanks are made is fascinating, from domes that surprise you in how far out they really come, to a miniature tunnel for the kiddywinks to walk through. 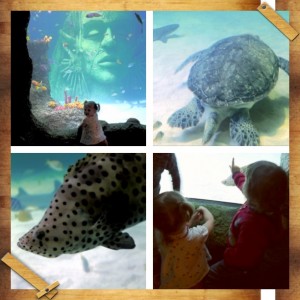 My favourite exhibit was the giant turtle called Ernie, he moved so gracefully about his tank. The giant statue looks out at you as he swims past and makes you think of a sunken city with tiny sharks and other brightly coloured fish to add to the effect.

It was amazing how close I felt to Ernie today but hopefully I will get the chance to be even closer to him one day soon as Sea Life are introducing a brilliant new experience “Sea Trek”, a diving experience in the tanks for anyone from 8 years and up! This is the first Sea Bed Walk of it’s kind in Europe and I feel so lucky that it is near enough for us to have a go. You don’t need any diving experience and the specially designed helmets provide 3 times the amount of air you need to breathe underwater.

My son will also be glad of the chance to go back as he was itching to go on the soft-play area that was still under construction today. I’m not sure when we will go but I know it will be sometime this year.

The final section of the centre is the interactive touchpool. Members of staff are on hand to help and you can hold a crab or a starfish (if you’re brave enough). I couldn’t quite bring myself to hold a crab as it was a little too spider-like but I did stroke it. My son is often cautious of new things so chose not to touch, but my 1 year old daughter was happy to copy Mummy and stroke the crab.

Oh, and one last tiny thing that I should probably mention…..

Alex from cBeebies was also invited along with his family and even though he was only there for a nice day out he was kind enough to let us have a picture taken with him!!!!

Thank you Alex, he may have been shy about it but you really mad my son’s day. He was so happy to have met you again after stalking you at Little fun fest and we will be putting his photo up in the playroom so he can re-live his celebrity moment