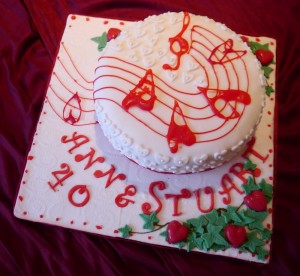 Last weekend marked my parent’s 40th wedding anniversary. We went up to visit them and of course I took a cake. I had lots of ideas about what I could do, including a red velvet cake or a cake with hidden hearts inside, but in the end I decided to stick with a simple but effective large round cake with a musical theme, similar to the square Diamond wedding anniversary cake I made last year for a friend’s grandparents.

I made this cake with a light vanilla sponge using a slightly adapted recipe from my normal sponge. The cake was covered with vanilla frosting and ready to roll fondant icing then decorated with spun sugar hearts and a treble clef. I also added fondant hearts with a sugar pearl in the centre of each to the edges and around the “music”. Sugarpaste lettering and fondant ivy on the cake board with red candy hearts added the finishing touches.

Once the cake has cooled use a cake leveler or a sharp knife to level the cakes, then use vanilla frosting between the layers and to coat the outside of the cake. I made 3 quantities of my standard vanilla frosting, find the recipe here.

I mixed some red coloured water icing to pipe the music stave (lines) and made red coloured spun sugar for the hearts and treble clef.

For the spun sugar

The cake was placed on a cake board covered in white fondant and decorated with fondant ivy and sugarpaste lettering. 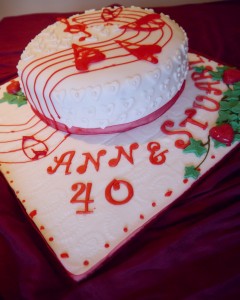