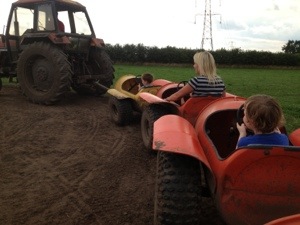 Earlier this year we visited a place called Red House Farm near Altrincham when it played host to a fabulous event called Little Fun Fest. Yesterday we decided to go for another visit as we had such a good time there. The farm is easy to find, not far off the M56 and well signposted. There are lots of things to do and the children’s play area is much more suited to young children than many I’ve visited. There’s a huge sand pit with lots of toys in it, slides and swings, a play house and several cozy coupe cars that my daughter is obsessed with. The cafe does very nice food and the coffee is the proper frothy sort- they even have take away cups so you can sit outside watching the kids play in the sandpit. 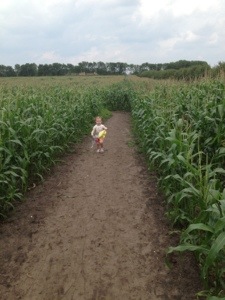 We spent the morning watching the kiddies play before deciding to head into the paid entry section. Entry was £6.95 with under 4s £3.00 each and under 2s free of charge. Inside there’s a huge maize maze to wander round, the design is based on the logo for The One Show and as you go round there are scarecrows to find. The kids had a great time deciding which way to go, the only problem was sorting out who got to carry the flag you are given to wave in case you need rescuing. If you have a pram the maze might be a bit bumpy but would be perfectly manageable – though if it was muddy it might not be a good idea

there were raised bridges where you could stand to look at the maze and we saw several parents of older kids standing up there and shouting directions.

After we escaped from the maze the kids got a little lolly as a prize and we moved on to the bouncy castle and slide in the same area. We also went on a barrel ride pulled by a tractor, climbed a hay bale mountain and played in another big sandpit.

By the end of the day we had very tired kiddies who didn’t want to leave. The only down side was that there were quite a lot of wasps around. There were a few wasp traps around but I would have thought a few more, particularly in the play area by the cafe and farm shop might have helped.

I would really recommend this as a nice day out and we will be going back again sometime soon.