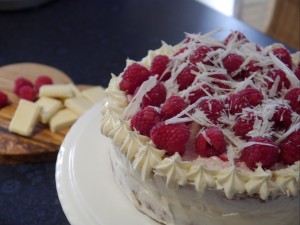 Hands up if you love the Great British Bake Off! I adore watching it and even thought about entering last year but my daughter was just 1 and realistically I would have probably ended up having a nervous breakdown.

I might not be baking in a tent but thanks to bloggers The Crazy Kitchen and Mummy Mishaps I have the chance to take part in the #GreatBloggersBakeOff a new linky following the themes of the TV show each week.

This week there were 3 choices, a sandwich cake, an angel food cake or a chocolate show stopper. I REALLY wanted to try the angel cake but with my son’s birthday next week I couldn’t justify buying the all important tin so instead I’ve opted for a Raspberry Ripple Sandwich cake with White Chocolate Ganache.

(I also used some extra raspberries for decoration)

The cake mix starts out as a standard vanilla sponge:

To make the raspberry ripple: 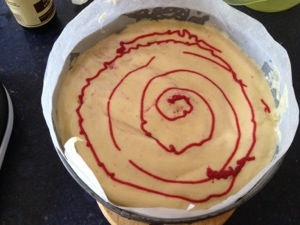 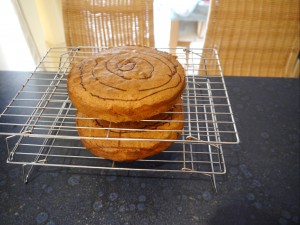 When I came to decorate the cake I changed from my original plan of showing the swirled top of the cake. Instead I levelled both cakes and used a white chocolate ganache to cover it.