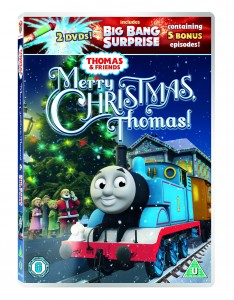 Back in September we were invited to Drayton Manor to see a special screening of the feature length Thomas film King of the railway. My son still tells everyone he meets about it and how he went to Thomas Land. In fact he’s asked Santa for the Take and Play Castle for Christmas (ambitious child). The nice people at Hit entertainment have kept in touch and last week sent us their new release Merry Christmas, Thomas!

Merry Christmas, Thomas is a 6 episode DVD with a 2nd 5 episode DVD called Big Bang Surprise included in the box (so 9 episodes in total). As soon as the package arrived my eagle eyed kiddiwinks spotted the Thomas Logos and stated asking what was inside. We watched Big Bang Surprise first which has all the familiar characters, before settling down this weekend to watch the wonderfully festive main DVD. All the episodes were as good as ever and kept my little monster happily entertained. Charlie the purple engine is enjoying telling jokes, Percy gets buried under a big pile of snow and the engines have a competition to find the best Christmas tree. There are also some live action scenes with Mr Perkins, Thomas’ driver who has run out of coal and is snowed in; these little scenes added a nice extra element to the DVD that kept my kiddies interested to see what would happen next.

I can very much recommend this DVD for any little Thomas fans, and it will certainly help to get them in the festive spirit. I expect to have seen it uncounted times by Christmas, just as I could probably recite most of the feature length stories by heart

the DVD is available from all good retailers and has an RRP of £12.99 although as I’m writing this it is available for £7.75 on Amazon.co.uk happy viewing everyone!