My son’s 4th birthday party is next Saturday and he’s asked for a Lightning McQueen cake. Naturally I’ve expanded the idea and his whole party now has a Cars theme.

I try to do alternatives to the ubiquitous jelly sweets for party bags so I recently tried making my own chocolates. For my daughter’s birthday I made butterfly and bug lollies but for this one I bought a chocolate mould with Lightning McQueen and Miss Sally.

I used Wilton Candy Melts for the decoration but since making the lollies in June I decided to use dairy milk as the filling because I prefer the taste. When melting these I used microwavable bowls and 20 second bursts stirring in between each burst. 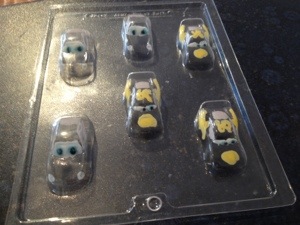 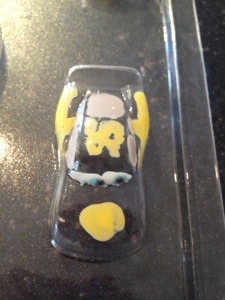 To start with I used black for the pupils of the eyes and blue on top for the iris’. Next I added white on top for the windscreens and for Sally’s headlights then mixed a little black and white to make a grey for the other windows.

I added yellow details to Lightning Mcqueen following the markings on the moulds. They aren’t perfect but they are only small and I don’t expect a group of 4 year olds will mind too much. 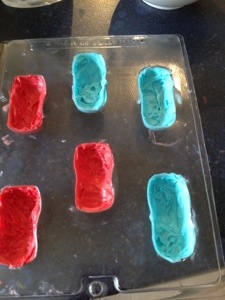 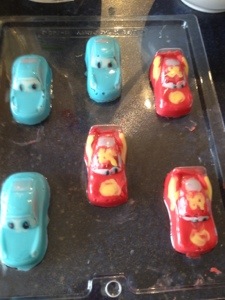 Next I added a layer of red to McQueen and blue to Sally. The tricky bit is pushing the main colour into all the edges to prevent bubbles without melting and blurring the details added in the first stage. After failing to do this properly for the first batch I made certain with the second by looking at it from underneath.

Finally I melted some dairy milk to fill in the centres of the chocolates. Once they were filled I placed them in the fridge to set before turning them out onto a cold surface. 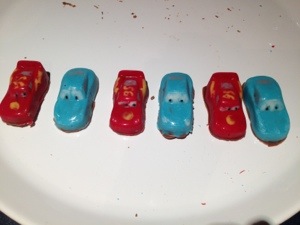 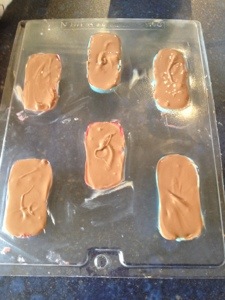