So I’m finally getting around to writing up my son’s 4th birthday. A couple of months ago I asked what he wanted for his birthday cake and he decided on Lightning McQueen from Disney’s Cars. I had a look on Pintrest for ideas and decided on a two tier square cake with a carved Lightning Mcqueen as the 2nd tier. 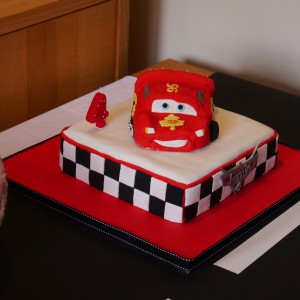 I used my standard Chocolate Cake Recipe and Vanilla frosting as a crumb coat for the cakes. The base layer was a 9 inch square cake and it took 3 layers to get the height I was after. I originally baked 2 square cakes and a large rectangular cake to use for the car. When I realised I needed 3 layers for the main cake I used most of the rectangular cake for this, meaning I didn’t have a lot of room for mistakes when I made the car from the leftover bits.

To cover the cake board I made up quite a lot of red fondant by kneading red gel colour though white fondant. I made enough to also cover the sides of the square cake and the car.

For the first tier of the cake I used roll out white fondant and then added a check effect to the sides. To make the checks I rolled out a strip of the red fondant the width of the side and then used White flower paste from Renshaw Baking and pre-coloured Black flower paste to make the squares. I used guidelines on my non-stick mat and a ruler to mark out the squares, cutting them with my mini pizza wheel sugarcraft tool . I then attached the squares to the red fondant using edible glue. Once the stip was fully covered I flipped it over onto greaseproof paper and applied edible glue to the back before very carefully lining it up with the sides of the cake. I made two separate strips because I didn’t have enough space to made one long strip. 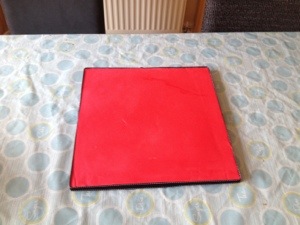 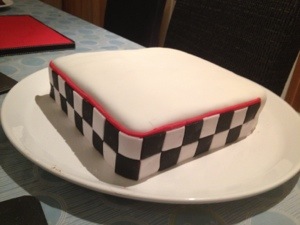 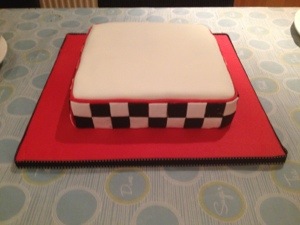 Next I started on the car: 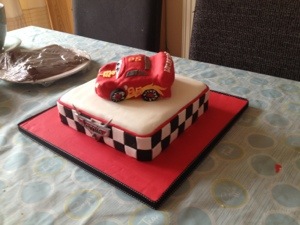 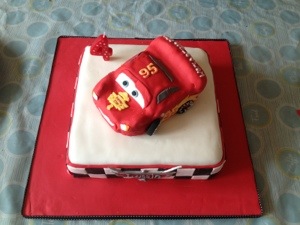