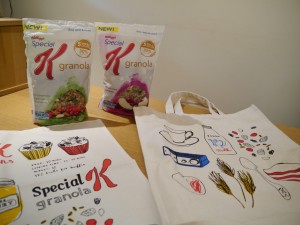 A couple of weeks ago I was lucky enough to be sent some goodies to celebrate launch of Kellogg’s Special K Granola. Granola is one of those things that I’ve looked at when shopping but never actually bought. When we were sent some samples of the first ever Special K Granola. I love Special K cereal and so I was very keen to try it, I wasn;t disappointe as it was fruity and delicious, my only complaint is that it was gone too soon because my husband decided to sub-contract as a reviewer (i.e. he ate it all).

We were sent two varieties to review, Raisins & Red Apples; and Cranberry, Pumpkin Seeds & Almonds – both were delicious and we would certainly recommend them.

Kellogg’s tell us that this Granola comntains 30% less fat than comparable cereals in the UK so what are you waiting for?

If you would like the chance to win a sample of the Granolas to try for yourself just enter using the widget below.
a Rafflecopter giveaway