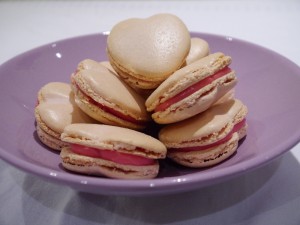 Macrons (or Macaroons if you prefer) are one of those trendy deserts that I’ve heard of a lot over the last couple of years but have never actually got around to trying – and by trying I don’t just mean baking I mean eating. I could be wrong but I think they started picking up in popularity when the Great British Bake Off chose them as a technical challenge a few years ago. Anyway I’d been meaning to try making them for a while, especially as they use Italian meringue which is something else I’d never tried. Finally, after being asked if I’d made them in January I decided to have a go and dug my ground almonds out of the cupboard where they’d been waiting for the last month or so. The first time I made them I filled them with a pink coloured white chocolate ganache, the second time I chose to use vanilla frosting, both were lovely.