Did you have fun on Friday for Halloween? My kids were both finally old enough to understand it a little this year and were very excited – they decided they wanted to have a party so we had a little tea party for the 4 of us – they helped to make the food and chose designs for their pumpkins.

Earlier in the week we went to a local farm shop where we chose pumpkins to carve out. They have lots of different shapes, sizes and colours and we ended up with 3 standard pumkins and a couple of smaller ones. We looked at designs and each chose a design which I then drew on and cut out. My son chose a Boo from Luigi’s Mansion (a Mario brothers computer game), my daughter chose a spooky face and I chose a witch with a bubbling cauldron.

We carved our pumpkins on the Thursday then had Friday to make our “party” food. I used a mould to make a red velvet Halloween Mickey Mouse cake and decorated it with stars of frosting. Before turning the cake out of the mould I leveled off the bottom of the cake with a bread knife and kept the offcuts to make cake pops. 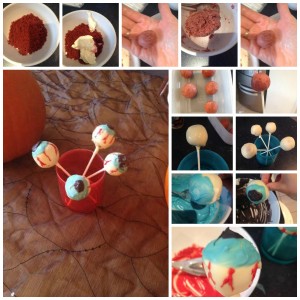 To make the cake pops (which I’ve never tried before) I blended the offcuts of cake to make crumbs then combined them with some left over frosting. I used the mixture to make balls and set them in the fridge for 30 minutes. I then placed the balls onto lollipop sticks and dipped them into tempered white chocolate. I used candy melts to add blue iris’s, black pupils and red veins to my cake pop eyeballs.

We did also have some savoury food for our Halloween, we decided to go for creepy pizzas made to look like monsters and a mummy. These are very easy to do you just need margarita pizzas, a circle cutter for the ham eyes, peas and sweetcorn (or you can make your own bases and top with passata and grated mozzarella cheese). 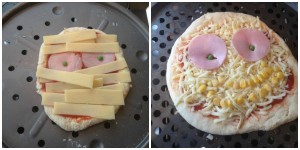 Everyone loved the Halloween tea party and my kids had great fun handing out sweeties to trick or treaters. What did you get up to for Halloween?