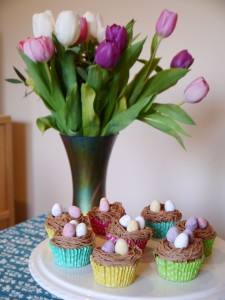 Easter isn’t that far off now and it’s always nice to be able to make some easy cakes with the kids. Today my kids wanted to make cakes, my daughter chose fairy cakes and my son wanted to make a Monkey Cake. For the fairy cakes I thought we would make something seasonal so I used chocolate frosting on the vanilla fairy cakes to make easter nests. The only special equipment I used was a nozzle (wilton #233) on my piping bag which can be used to create a grass effect. We used a palate knife to cover the centre of each cake with a thin layer of the chocolate frosting and then piped a circle around the outside to create the nest effect, I went round several times to get the height of the nest right. Finally I added some mini eggs to the centre of the cakes. The recipe for the cakes and frosting is below. 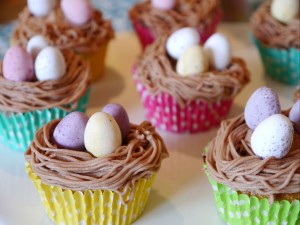