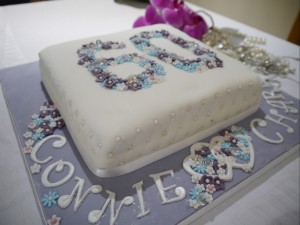 I’m not a professional baker and I would never pretend to be but a friend asked if I would make a 60th anniversary cake for her grandparents and I was happy to do it. We had a look on pintrest for ideas and settled on a simple square design. It was something I’ve been looking forward to and wasn’t too worried about as it was all elements that I’d done before. But as I said on twitter yesterday:

Never ever say that something should be straight forward. Especially out loud where the universe might hear you!

Things started out badly with the cake mix. I was making vanilla sponge in a 9 inch square tin so I just trippled my cupcake recipe meaning I needed: 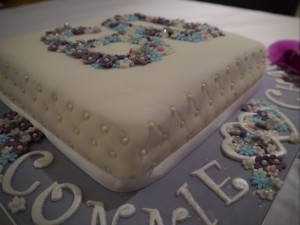 So what went wrong? Well first of all I new I needed 6 eggs so just took a box out of the fridge and used all the eggs in it, except that when the test cupcake was cooking and I went to tidy up I noticed that there were only 5 egg shells. I dithered about whether to add another egg but I’d already got my batter to the right consistency so decided against. Especially since the cupcake tasted ok. The cakes came out ok although they probably rose a bit less than they would have. On to the next stage.

I used a cake leveller and made up some vanilla frosting to cover the cake before adding the fondant. To see how to cover a cake with fondant see here. Basically you roll out the fondant on a non-stick mat and then place the whole thing upside down over the cake leaving a smooth finish when you peel back the mat. Except that my non-stick mat is on it’s last legs and made the fondant really hard to remove. The smooth surface of the cake wasn’t and I spent ages trying to smooth it out. 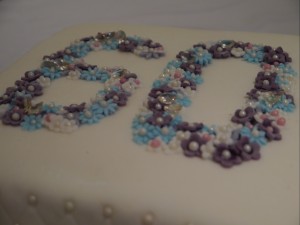 Next I added a quilting pattern to the sides of the cake with a textured surface and added sugar pearls at the points of the diamonds. I added sugar paste flowers in 4 different styles to the top of the cake to make the 60 and added the same detail to the cake board along with names and a double heart shape. Finally I used edible gems made of jelly to add the diamonds.

It wasn’t a disaster and I’m happy with ow the cake turned out but oh my goodness it was harder than it had any right to be!!