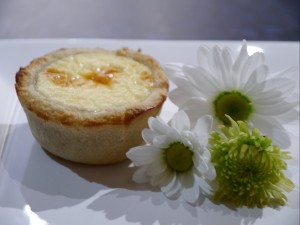 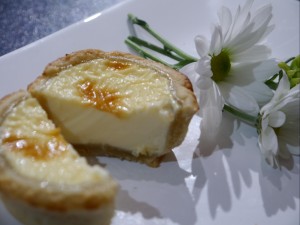 Things that went a bit wrong:

The recipe for my sweet pastry is as follows:

If you have a blender (which I don’t), just put all the ingredients in and mix. Otherwise place the flour and in a bowl and mix through before rubbing the butter in to create a breadcrumb effect. Next beat the egg yolk and mix through with your hands or a wooden spoon. Add the water and combine the dough into a ball. Knead briefly to ensure the egg yolk has distributed evenly throughout the pastry (no yellow bits).

Wrap the pastry in cling film and place in the fridge to rest for half an hour.

Once the pastry has rested (you could make the custard while you wait) cut out circles large enough to fill the moulds in your cupcake tray. butter the moulds and carefully position the pastry, mine were a bit unsuccessful, I think the sides of my tray are too steep meaning I have to remove part of the circle to make them fit.

For the custard (remember I made a 7th of the BBC recipe, I also added vanilla):

Linking up to The crazy kitchen and Mummy Mishaps