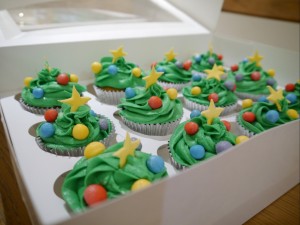 Just before Christmas (it seems such a long time ago now) my husband left his old job for an exciting new work from home job with Unity, the company responsible for the Unity engine used in many computer games including a lot of “indie games”. When he handed in his notice I made him a Resignation Cake to take in to soften the blow, so naturally his colleagues asked him to bring in leaving cakes (it was the first agenda item in their weekly meeting and everything ;)). Because it was Christmas I made some Christmas tree cupcakes and also made a Chocolate piñata in the shape of a Christmas tree, inspired by Ghost Writer Mummy’s entry to November’s Celebration Cakes and Bakes.

The cupcakes were made (as always) using my standard recipes for vanilla cupcakes and vanilla frosting. I coloured the frosting with Wilton Kelly Green gel and used a large star nozzle to pipe swirls starting at the outside of the cakes and working inwards. I then coloured some fondant using blue, yellow, red and purple gels and rolled small pieces between my palms to create the baubles. I attached them to the cakes using edible glue but water would do just as well if you preferred. I coloured flower paste with the same yellow to make the stars and used a star from a patchwork cutter set. Finally I sprayed the cakes with an edible lustre spray.

I made the piñata using a silicone mould that came with the Christmas edition of the Disney cakes magazine which I subscribe to. I tempered the milk chocolate the way I was shown at the Chocolate making class I attended a few weeks ago and used my silicone pastry brush to spread the chocolate over the mould. I set the chocolate in my freezer and added a 2nd layer before removing it from the mould. I filled the piñata with the remaining biscuits  made earlier that week with my kids and joined the two halves together with the left over melted chocolate.  Finally I used the very last bits of melted chocolate to stick on mini smarties as a bit of decoration. It was pretty late at this point so it wasn’t perfect but I really needed to get a bit of sleep ;). 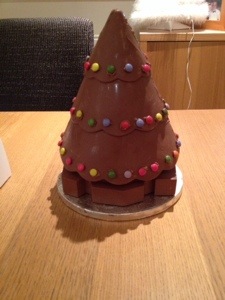 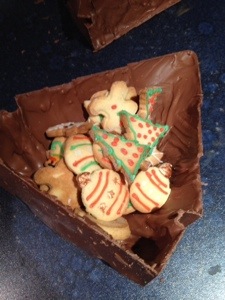