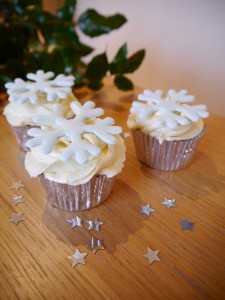 My son started at the local pre-school in September and they have asked parents to make cakes or donate prizes for their Christmas fair / fund raiser this weekend. It’s the first time I’ve done cake making for a school event so I was a bit nervous, I read a post earlier in the year by someone worrying about sending in cakes that look too show-offy. Having said that if I wasn’t a bit of a show off# I wouldn’t write a blog about cakes so in the end I decided to just go with it and make vanilla cupcakes with vanilla frosting as I normally would. I also made a few other Christmas themed goodies to write about but I’m saving them for another day. 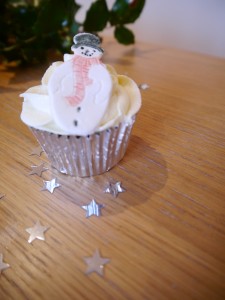 I decided to go with frosty snowflakes and snowmen. Originally I thought about using the patchwork snowflake cutters I have but yet again I just can’t get the wretched things out without breaking them so instead I used larger plunger cutters for both the snowflakes and the snowmen. I coloured some sugar paste blue for the snowflakes and left the rest white for the snowmen. I then painted on some details to the snowmen with diluted gel colourings. Both the cakes and the decorations are sprayed with an edible pearlescent glitter to give them an extra frosty sparkle. So here they are all boxed up and ready to go, annoyingly when making them I didn’t split the batter quite right so ended up with 23 cupcakes instead of 24. Not to worry though I just snuck in a chocolate cupacake with milk chocolate ganache and homemade chocolate santa. (See I told you I’d been making some other goodies). 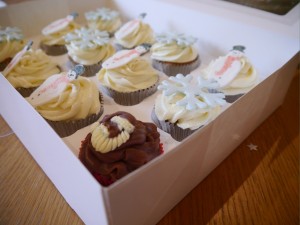 Linking up to Emily Leary’s Recipe of the week. 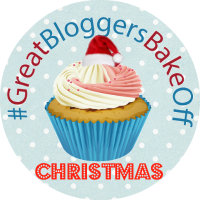