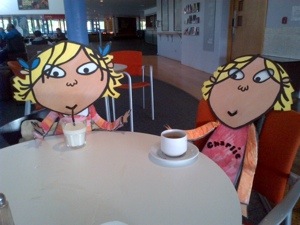 Charlie and Lola is a lovely programme on cBeebies based on the books by Lauren Child. Both my children enjoy it because it’s about a big brother and his little sister. My daughter particularly loves it and her “charlola” dolly goes to bed with her every night. Back in September my more organised friend told me about a Charlie and Lola play that would be at the Floral Pavillion in New Brighton this week so a group of us booked tickets and I’ve been looking forward to it ever since. The show is only running during school holidays (obviously because Charlie and Lola are in school themselves the rest of the time), but is stopping off at various theatres during 2013 and 2014. Here you can see Charlie and Lola enjoying a well earned break in the coffee shop at West Yorkshire Playhouse in Leeds last week before their photocall. Apparently Lola was disappointed that there was no pink milk but the chef promised to have some for her next week when they come back to perform the show. 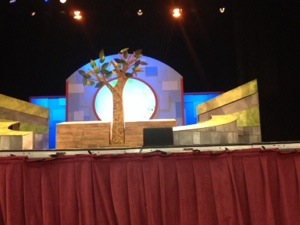 We saw the show on Friday and I was really impressed. My son can be a little nervous of new things but the puppets were so like the animation on cBeebies that he instantly loved it and was so excited. My daughter spent the whole time pointing out all the characters to me. I really recommend this show as I think every child watching loved it.

The show starts in autumn when Charlie and Lola are going back to school. Everything is a bit different but still fun and as they go through the year there are retellings of some of the episodes from the TV series, all joined together with plans for the school play at the end o 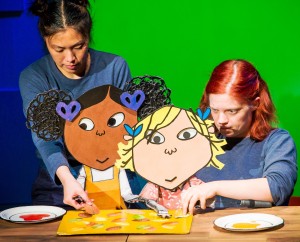 The show is by Watershed Productions and a list of tourdates can be found here the show has finished at the Floral Pavillion now but will be in Leeds next week (30th Oct-2nd Nov) and Manchester at Christmas (12th December – 5th January).

If you’re looking for something to take your little Charlie and Lola fans to in the school holidays this is an absolute winner. It is extremely really my bestest most favouritest play I have seen for ever and ever – as Lola might say. 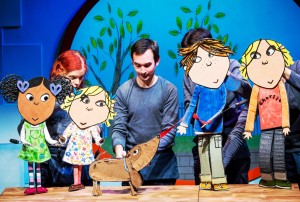 This is not a sponsored post. I paid for my tickets and simply wanted to write about how great we though the show was.