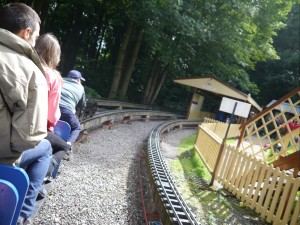 A couple of weeks ago the annual round of birthday parties started as the babies from our old NCT class started turning 4. (I still can’t quite believe this). As the kiddies are getting older the parties are actually starting to be proper activities. Well the other kiddies’ are, our is still just inviting a load of people to our house.

Celyn Wood Miniature railway is somewhere I’d never heard of before. It’s a miniature railway track that runs though woods in the grounds of the college of north east Wales near Mold. There’s a station and a kitchen with toilets nearby in the carpark.

The railway is open to the public throughout the year on Sunday afternoons from 11 am till 4 pm, although it’s probably worth getting in touch to confirm the trains will be running before going. I think the charge is £1 a head per ride although I’m not positive as we were there as part of the birthday party. There are details of the birthday package in the PDF here Birthday party information PDF

The kids had a brilliant time riding on the trains, there was an electric engine and a steam engine. There was also a model railway to one side which had Thomas and Percy running on it. When they weren’t of the train they were stood staring at this for ages.

Directions to find the railway are here. 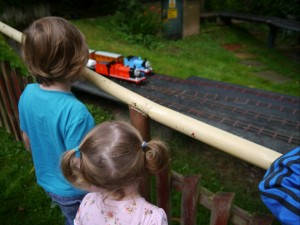 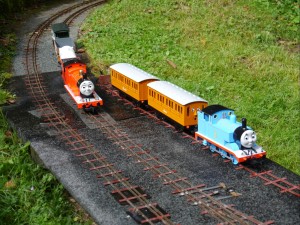