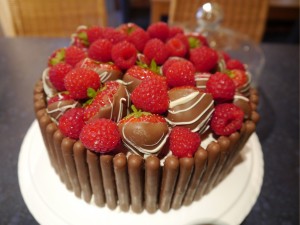 A couple of weeks ago I had my first try at making chocolate covered strawberries, they were so yummy that we ate them all within a day. I tried lots of different toppings and had lots of fun so I thought I’d expand the idea and make a summer cake using them.

The cake was a chocolate and vanilla swirled sponge with vanilla frosting. I used Cadbury’s chocolate fingers around the sides and topped it with raspberries and milk and white chocolate covered strawberries.

For the cake I used 2 buttered and lined 8 inch cake tins and preheated the oven to 180C.

1and a half tsp vanilla essence

For the frosting I used my normal recipe of 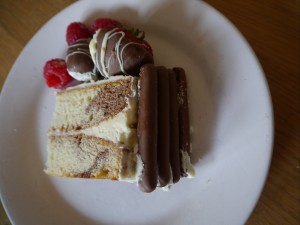 I used the frosting between the two layers of the cake and on the top and sides. As you can see in the picture I didn’t bother to level the cake but if you particularly want it to look perfect when cut for a special occasion use a cake leveller (it has the added bonus of leftover bits that you get to eat straight away). Instead I turned the top layer upside down which, if you fill in the middle with frosting, gives you a nice flat top to work with.

The chocolate fingers stood up around the edge were held in place by the frosting, I’d suggest doing this section once the cake is on the board or plate it will be served on as moving it afterwards meant I had to rearrange them a bit. 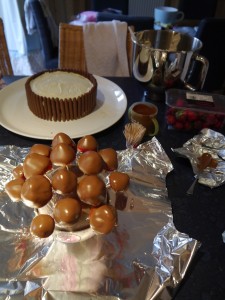 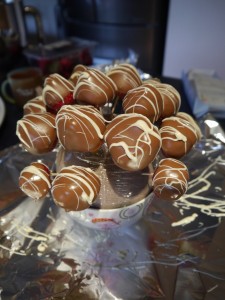 The chocolate strawberries method is based on the method here, I used floristry foam to hold them as they set and drizzled melted white chocolate over the top of the milk chocolate using a spoon. A bit of tinfoil underneath saved me from having to clear up loads of chocolate drips.

Once they had set it was just a case or arranging them on top of the cake and filling in the gaps with fresh raspberries.

I’m adding this post on the teatime treats linkey for run by What Kate Baked & Lavender and Lovage and also to the calendar cakes linkey run by Dolly Bakes and Laura Loves Cakes, the theme for both is fruit.